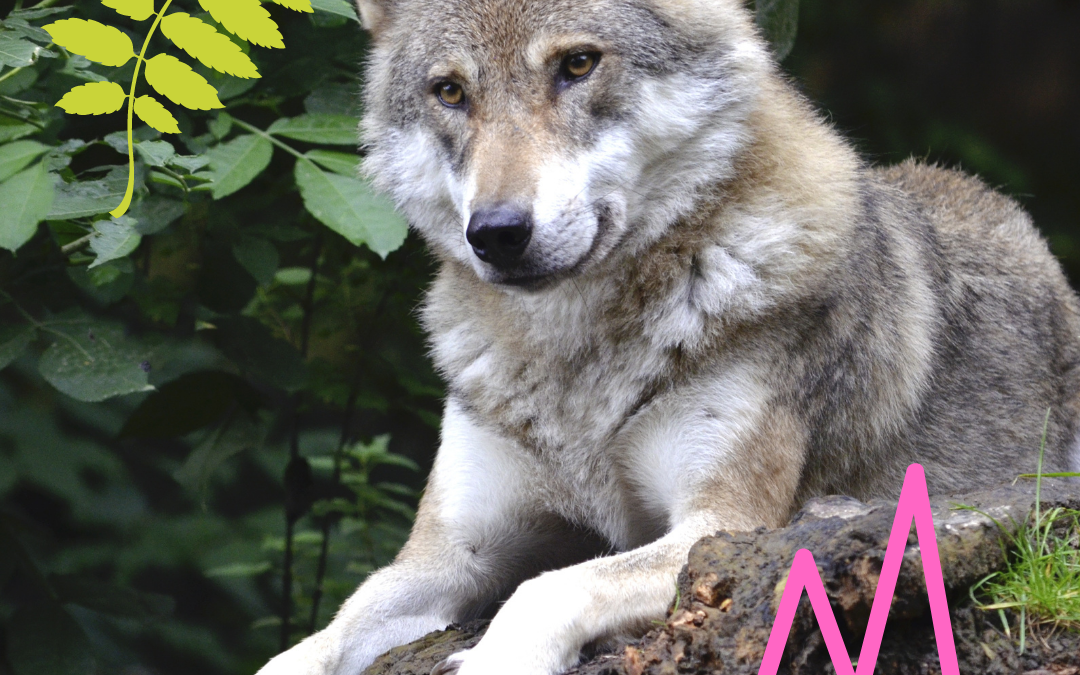 This is an archive posting, first posted in 2017, but bought to you fresh and fine, once again in December 2020. Enjoy 🙂

Wolves are really fascinating animals, you could easily endlessly Google about their different characteristics and habits, so I will try my best to keep this concise!

Wolves are part of the “Canine” family. This is the species from which our domestic dogs originally came from, which is where I think a lot of our attachment to the wolf species stems from. All wolves are categorized into either red or grey wolves. There are many different subspecies of wolf which are defined by their habitats and individual characteristics. Their habitat – and therefore diet – has great impact on their size. All wolves are meat eaters; however, they can range from 55 pounds at full size up to 200 pounds in weight and between 40-65 inches in length depending on the sub-species.

Wolves are found in the Northern Hemisphere where they roam a variety of landscapes. They have a notorious reputation in the wild for the connotations of their howling to the moon (mostly down to Hollywood interpretations of the species and also because of the legend of werewolves!) However, wolves are very intelligent and social animals. They live in packs which have between 6 and 20 members at any one time – they use the tactic of strength in numbers to bring down prey that is much larger in size than they are, such as moose or elk. Despite their bad reputation they will actually only kill to eat and are only violent when they are driven to attack to protect their pack – which is a mentality that even us humans have, to be honest.

Their pack lifestyle is vital to their survival as a species. Typically, only the alpha male and female wolves will mate and produce offspring – but it’s up to the whole pack to protect and rear the young, giving them a high chance of survival to adulthood.

A wolf in the wild will live for between 6-8 years, however in captivity that can grow to up to 16 years. By nature, they are very good at adapting to their surrounds, therefore they adjust well to living in captivity but also, in a conservation sense, being introduced or re-introduced to different areas is often successful with wolf species. Unfortunately, this may not be enough to keep then off the endangered list. As a pack they can roam up to over 6,000 square km, however their habitat is vastly decreasing due to human expansion in the Northern Hemisphere. Saying that, there are conservation and protection programmes in place to help save them from extinction – so something is already being done.

The wolves have survived through a lot in the past, so it’s our turn to do something to keep them away from extinction. To make up for our atrocities of the past. Wolves have been extensively hunted by humans since the 1600s. They are hunted for many reasons including to drive them from an inhabited area, in some cases for food or to eradicate competition for food, but mostly to use their fur pelts to sell and make money. By the 1970s the wolves had suffered great declines in both their numbers and their habitat. Although, as I said, there are conservation programmes now in place, it will still take wolves a long while before they recover from their losses. This is made more difficult as it is still legal to hunt wolves in some places at certain times of the year – and also the inevitability of illegal hunting. Plus, the ongoing problem of the current US Presidency which could be a whole blog post of its own!

The illegal killing of wolves is not only dangerous for the recovery of the species, but it also endangers other species within the wolves’ ecosystem. Many wolves are illegally killed with poison, which inevitably travels through the food chain once the deceased wolf is eaten by scavengers.

Wolves have become a staple image within our society through myths and legends, and despite their ferocious reputation, they are an intelligent species who have survived despite being put through trial after trial by humans. Thankfully, much of the world seems to be beginning to understand the importance of protecting the natural world and the species that are endangered. These species make up the variety of life on this planet which makes it such a beautiful and wonderful place. We are the only species that is actively destroying the biodiversity that is so important to our life on earth and I hope that we realise what we have, and how lucky we are to have it, before it’s too late.

Those of you in the UK, as I am, you can help this beautiful species by supporting the UK Wolf Conservation Trust

If any of you know of any other ways to help support the conservation of wolves, in the UK or in the rest of the world, then please comment below.

Go forth and save the world, educate the young and maybe, just maybe, we can keep this world as wonderous as it is for generations to come.

Sudan: A Year On

Mother, I am sorry.