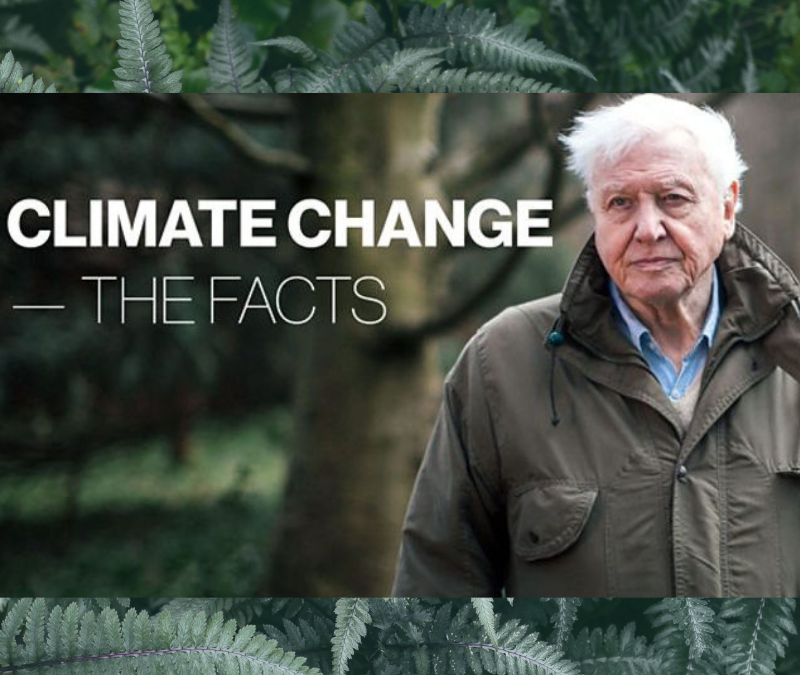 Earlier this week I did a Facebook Live video about the recent BBC programme; Climate Change – The Facts.

It was fronted by David Attenborough and it included interviews with a number of experts about climate change and the impact that is having on the world around us.

It shows that people from all generations all sharing the aim of changing our ways to save the planet and it was, not only interesting but, inspiring.

Did you watch it?

What did you think?

The facts that are shown in the programme are truly shocking. Even for someone like me who has an interest in the subject matter and likes to keep up-to-date.

20 of the hottest years ever recorded have happened in the last 20 years.

Now that is a fact that, hopefully, stops you in your tracks. The data on climate change is not isolated – what the data shows is that the findings are echoed all around the world. The impact on the world is shown again and again through facts and figures, graph after graph shows us that we are changing the climate of the world and that is having a disastrous effect. It is a fact that human activity and the use of fossil fuels (Coal, Gas & Oil) are changing the planet and those changes will soon become irreversible.

The horrible truth is that climate change is no longer simply data on a page but we are able to see and feel and experience the climate changing around us.

The programme told us that it’s estimated that 8% of species are at risk of extinction due to climate change. The smallest loss can have damaging effects on biodiversity and the stability of the global ecosystem. Which puts so much of modern-day life at risk too.

Climate change can cause damage to many different facets of the current life including the potential loss of life, breakdown of economies, displace communities, biodiversity, flood homes, destabilize ecosystems, climate disruption, and crop productivity.

The programme discusses the simple changes that we can all make today. Now, I know that I bang on about this a lot – so I thank you for baring with me! But I talk about consumer power and dietary changes because if we all committed to them – even in a small way – then we would make a significant difference.

Why not take some time to look into your own carbon footprint?

The average carbon footprint for a person in the UK is 13 tonnes of Carbon Dioxide equivalent per person per year. Why not see how you compare – there are many calculators online, but here is one that I found: www.carbonfootprint.com

Now if the facts and figures aren’t enough to grab your attention then let’s take a moment to think about how the climate change that we are causing is affecting the other species on this planet. The programme showed some heartbreaking footage of a species of bat in Australia called “Flying Foxes” they are large bats which are used to the climate that comes with living in Australia. However, due to the massive heatwaves of last year, many of these bats died. The footage is horrid to watch but it is vital that we pay attention to the aspects of this world that make us uncomfortable. Blocking out the truth is not going to stop these horrible things from happening. 11,000 individual bats from a single colony died. Take a moment for that to sink in. The fact that this is happening and we aren’t doing everything we can to limit our impact on the planet to stop it happening again astounds me. If not now, when?

I ask you to go and watch this programme if you can find it online – if you are reading this when it’s posted then it is still on iPlayer – and take some time to look at changes that you can make in your life and about the impact that you can have on the world around you.

I said this on my Facebook Live video but it is something that really resonated with me from the programme so I am going to say it again:

If you had 1 week to change the rest of your life – would you? What if I gave you a list of things to do in that week, and if you did those things then the years ahead of you would be guaranteed? Would you not do anything and everything in your power to get that list done? In the wise words of Greta Thunberg – you need to act as though your house is on fire. Because it is.

Written by Rebecca Hansell for Small World, Big Cause