Sudan: A Year On 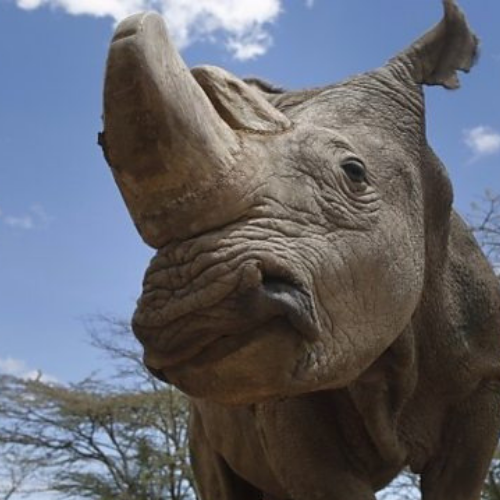 It’s been one year since Sudan, the last male Northern White Rhino, sadly died. This meant that the species was extinct, despite there being a few female individuals left, there was no hope of the individuals reproducing and saving the species.

It was a sad day when Sudan passed last March, however, it’s important to consider the life and death of this rhino who captured the hearts of the entire world and stood for the importance of saving the beautiful species’ that call this planet home. He lived until the ripe old age of 45 (which is well over 100 years in human terms!!) and died of natural causes – which is a more dignified way to go than that of so many of his species, who have tragically died at the hands of poachers.

Sudan may be gone but, in his life and in his passing, he has become more than a rhino. He has become a trigger point to wake people up to the mass extinction that is happening all over the planet. With Sudan’s death, the world mourned and conservationists joined forces to try and come up with ways to bring back hope for this species.

We have seen conservationists embrace more hi-tec methods to try and save endangered species. Incredible foresight from the keepers that cared for Sudan for many years, means we do have some sperm samples that have been frozen which could be used in new age methods such as IVF, stem cell science and gene editing, to save the species.

These new areas of conservation are somewhat controversial – with scientists believing that knowledge, resources and finances should be being spent on the species that are not yet extinct rather than bringing back the species that we have already lost.

This is a debate that will no doubt be discussed for many years to come as science develops and the plight of endangered species’ worsens. However, for the purpose of talking about the legacy of Sudan, this area of conservation plays a huge part in shaping a sense of hope for the future.

We are all aware of how babies are made (if not.. I am not about to explain!) – we have Sudan’s sperm and we have remaining female rhinos so that is it right? Not quite. The females that are left have health problems and are also the daughter and the granddaughter of Sudan so they are not genetically viable to create a new rhino population. So, this is where science comes in with lab-grown eggs that can be fertilised and carried by a surrogate individual – most likely a Southern White Rhino as they are the closest living relative of Sudan’s species.

So, what have we learnt in the year following Sudan’s death?

We don’t really know how many species call this planet home, but even if the lowest estimates are close to the truth, that equates to between 200 – 2,000 extinctions happen every single year.  We are currently in the 6th mass extinction crisis, we can keep arguing numbers and technology but really the only way to save the planet, and the species on it, is to make drastic change to our everyday lives and to work together to make this planet a sustainable home for everyone.

The prognosis might seem bleak but there are some things that we can all do to help prevent further extinctions.

Some are the usual:

Some are more hands-on:

Small things can make a big difference. Our actions may not be able to save the Northern White Rhino but hopefully by changing some things in our lives can have a wider impact globally.

Sudan is gone but what he stood for was hope.

Hope that this is not the end.

Hope that we haven’t given up fighting for the survival of biodiversity on this planet.

I do believe that the tables are turning and the world is waking up to the need for immediate and drastic action. Blue Planet ll woke us up to plastic pollution in the ocean and the hazards of micro-plastics. Now, young people all over the world are joining forces to make their voices heard thanks to Greta Thunberg.

We may not have learnt much in the year since Sudan’s passing but I believe we are moving in the right direction and that is something.

As we reflect on our place in this world, I will leave you with the words of Sudan’s carer and friend who saw him through his final moments, Jemu Mwenda:

“…the last few years completely changed me, and as you taught me daily I continued to teach and inspire my fellow humans to be conscious and sensitive of our environment….What I regret most, is whether my fellow humanity has learned from your existence. I tried as much [as I could] to [make] them hear you through my thoughts and the lessons I learned through our personal day to day life, though still my voice has been small… If I was powerful in the face of Earth and conservation world 19/03/2018 would be “Sudan, the legend day” a day when parents should take their kids out and teach them how and why we need to embrace the environment…. On the other side of life. Greet Lola, Saut, Nasima, Nabire and the rest of the rhinos, tell them that some humans still uphold the madness that rhino horn is a cure, but there are others that still are fighting for your future.”

Written by Rebecca Hansell for Small World, Big Cause.