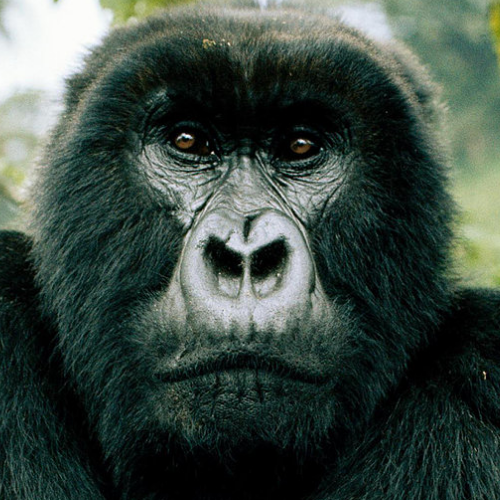 I picked up the book purely by chance and it is honestly one of the best books I have ever read – I can’t recommend it highly enough. You can read my review of the book here.

Mountain Gorillas are one of the most fascinating of all the primates because they are so close to humans in their evolution. How can you not feel a connection with these wonderful, beautiful creatures? Unfortunately, not everyone is in agreement on this and Mountain Gorillas are in danger of being lost forever through poaching and habitat loss and is rated as Critically Endangered by the ICUN.

Mountain Gorillas are found anywhere between 8,000 and 13,000 feet in mountain forests in The Democratic Republic of Congo, Rwanda and Uganda. Females weigh just under 100kg and males can weigh up to 160kg, and standing can be up to 5.5 foot tall! They are definitely not an animal that you would want to get on the wrong side of, saying that, Gorillas are only hostile when defending their home or their families – so you would be unlikely to rub one up the wrong way.

They live in groups and have a complex social structure. The dominant male is known as the “Silverback”. This leader will typically be in charge of about 3 females and up to 5 offspring that he will defend from other groups and predators.

Mountain Gorillas have had a tough ride for a long time due to the countries that they live in being prone to war, hunting, habitat loss and disease. Currently, there are less than 1,000 individuals still living in the wild. However, there are people working hard to save this species from extinction. Thanks to these efforts, numbers have risen significantly since the 1980’s. This is down to the work of people (such as Dian Fossey) who have made it their mission to protect these vulnerable individuals over the past few decades.

Poaching is a difficult issue to control in countries where people struggle to make a living, as poaching is a way to gain significant income. However, through creating Gorilla tourism, conservation projects have shown the local people how they can sustainably profit from their gorillas. This tourism also gives the species some protection against habitat loss which is driving them further up the mountains to contend with temperatures so low that even their thick fur isn’t always enough to keep them warm. By using the gorillas existance to generate income to the surrounding communities, we are giving them the best chance for continued survival in these, sometimes, volatile countries.

Despite the efforts of those working so hard to save the Mountain Gorilla, these countries are difficult to navigate to secure protection for the species and it makes any real conservation work incredibly difficult to monitor or sustain. It is likely that keeping the Mountain Gorilla safe will be a continued battle for conservationists until the countries become more stable and settled. However, even in these unsettled times, there are people out there to give the Mountain Gorilla a fighting chance at survival – which is amazing! Many charitable organisations are working hard – and working together – to keep this species from extinction.

The WWF describe the Mountain Gorilla as a priority species. Now, it’s always difficult to decide which species gets the resources to help save it – as inevitably there are never enough resources or money to go around. But I think that Gorillas are so closely related to us – beaten only by the chimpanzee – that if we aren’t willing to pull together and save our cousins then what hope is there for other species?!

Conservation doesn’t need to be something that happens in far distant places – we can all do our bit to help the environment. This world is all of our homes so we should do what we can to help our neighbours – be they close genetic cousins or not.

Encourage eco-tourism that is done in a sustainable way.

Boycott anything that falls short on animal welfare.

Be aware of our place on this planet, and do whatever you can to preserve it – in all its beauty – for generations to come.

I’ve said it before, and I will say it again and again… just doing something is a start.

Ignorance is not bliss, it’s unacceptable.

I believe that we won’t let the Mountain Gorillas become extinct, but they won’t make it without our help. How can you not want to do something when you look into those wondrous eyes…?