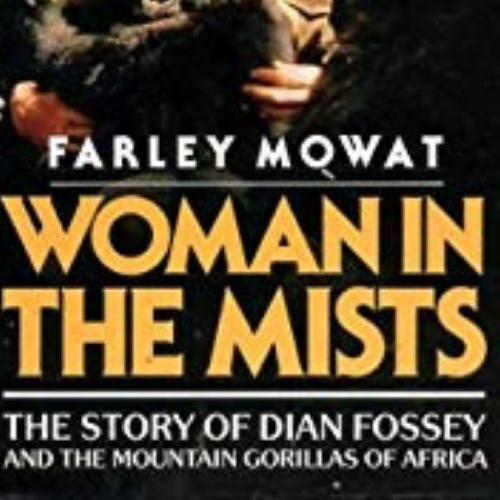 “When you realize the value of all life, you dwell less on what is past and concentrate more on the preservation of the future.”

Deep in the mist shrouded Virunga volcano country of Central Africa live some of the rarest, most intriguing animals on earth: the mountain gorillas. The extraordinary American woman who pursued her dreams into the very heart of Africa to study them was Dian Fossey. There she fought for their survival against poachers and tribesmen, scientists and zoo collectors, and there, finally, she died for them, brutally murdered on December 28, 1985.

Handpicked by the eminent anthropologist Louis Leakey to head a long-term study of the primates, Fossey came to Africa in 1966 in search of the great, dark, luminous-eyed apes. Left alone in the primeval African forest, she came to know and understand them. Slowly, very slowly, they reciprocated. They gave their trust in return for the absolute love she showed them.

During her final ten years in the Virungas, Fossey became the champion of the mountain gorillas, doing everything she possibly could to save them from destruction. Now, through exclusive access to her private correspondence, intimate journals and interviews with her friends, her colleagues, and her critics, Farley Mowat creates a full portrait of an embattled, mercurial, and passionate woman. Charismatic and intelligent, she did what few naturalists have dared to before: sacrificed her desire for children and a family, endangered her health, risked her academic career, dedicating her entire life to the preservation of another species.

From the first magical expedition into the Virungas to her dangerous vigilante patrols in her crusade to protect the gorillas. Dian Fossey’s story rapidly escalates into compelling drama. Ambition and heartbreak, violence and brutality, witchcraft and murder combine with the seductive beauty and serenity of Africa itself in a chemistry which shocks and moves the reader to rage and tears.

Woman In The Mist is a book of singular importance and eloquence. Farley Mowat’s impassioned biography does more than reveal the totality of Dian Fossey’s life and work. It lets us understand her heart.

Farley Mowat, author of such bestselling works as A Whale For The Killing, Never Cry Wolf, People Of The Deer, And No Birds Sang and Seas Of Slaughter, has long spoken out against man’s destruction of the earth and it’s creatures. A recipient of Canada’s highest literary honour Farley Mowat ranks as one of our most distinguished storytellers and naturalists. He is an author uniquely able to portray the courageous life of Dian Fossey.

Where can I start with this book? It came to me purely by chance. In all honesty I had never heard of Dian Fossey – although I was aware of her contemporary Jane Goodall. I had finished the book I was reading and was on the look out for something new (I always like to have a book on me as I find that reading is one of the most effective ways of to ease my anxiety) and I was at a train station where they have second hand books for sale for charity. This caught my eye, I immediately made the connection between the title and “Gorillas In The Mist” but that is as far as my understanding went. I paid a few quid and slid my new book into my handbag and went off on my journey.

Now this chance encounter has led to me reading one of the most interesting books I think I have ever read. Sure, it was published in the late 1980s so some of the language isn’t as politically correct as it would be now, but the story of passion and survival and determination is one that is utterly timeless. Dian Fossey is a hugely significant person in the history of conservation and is so admirable because she went out there and did it. She didn’t sit around talking about how we could, or if it’s ok too…. she went out into the jungle, chased away poachers, broke their traps and took on the Rwandan powers that tried to do anything but help her in her mission. She was one hell of a lady! She understood that sometimes the fate of a species can only be changed with immediate action – and I admire that spark that, so clearly, glowed inside her until her untimely end.

I have described this book as interesting rather than enjoyable because I think it is important that you know what you are about to read. This is not a holiday read. This book is at points graphic and upsetting, at times it is enjoyable but, above all, it is real. It pulls no punches. This was the life of Dian Fossey, these are things that she came up against and it makes you wake up the the stark reality of what is happening around the world. Poaching is a real thing, a real problem. It’s not just a statistic, it’s something that happens – animals are butchered – murdered– to create items for tourists, or to sell on the black market. Life isn’t always pretty, so just be prepared for that going in.

I have also written a piece that is called “Spotlight: The Mountain Gorilla”which talks in more detail about their stuggle against extinction, but just to touch on it briefly here. Unfortunately, they are still listed as critically endangered by the IUCN, although there are still those who are trying to save them they are still suffering greatly from both poaching and habitat loss.

The book takes sections from Dian Fossey’s diaries and letters, coupled with Farley Mowat’s narration of events to form the story of her life in a way that makes you live it alongside her. You feel her sadness when a gorilla is killed or when her heart is broken, you feel her loyalty to those who are at the camp. You come away with a real sense of who she was as a person, not everyone liked her, but she didn’t really care – she was there for the gorillas.

To be honest, I found Dian Fossey really inspirational to read about. She is a real go-getter and a problem solver. She was able to befriend wild animals and gain their trust decades ago – when even now we are having to debate whether animals are sentient! She was so ahead of her time and so aware of the fact that we are not the only intelligent species on this planet. These gorillas showed trust, recognition and affection towards Dian – which is phenomenal. There is so much about this world that we are yet to understand, and animal behaviour is just the tip of the iceberg. But if Dian Fossey can do this, arguably on her own and with minimal scientific background at the start, then who knows what we will be able to achieve and find out in the decades to come. I find that a really exciting prospect.

The loss of Dian Fossey was a blow to the conservation world, whether she was liked or not, but it was a bigger blow to the mountain gorillas. However, because of the work that Fossey did whilst she was alive, some 30 plus years after her death they are still here to keep fighting for their survival which may not have been the case otherwise. It is up to us as humans to spare a thought and to do something to help the species that live around us. We are all part of the same world and by hurting them we are hurting ourselves because we didn’t get to where we are today alone, and we certainly don’t have a future without the biodiversity that is around us. We need more than just the occasional Dian Fossey character to stand up for those species that can’t, we need to acknowledge our place on this planet isn’t a given. We need to do anything we can to keep the beauty and diversity and the miracle that is our Earth for future generations.

It will make you laugh and cry and scream and shout, it’s one hell of a ride but one worth taking. Go Dian!

“I know now that I’ve truly come home. No one will ever force me out of here again.”